Some marketing campaigns will be remembered for years (How many licks…?, Can you hear me now?). Certain slogans become timeless (Just Do It, Got Milk?). Spokespeople become cultural icons (The Marlboro Man, Flo). Some brands even become so synonymous with their product they become part of the lexicon as verbs (Google, Uber).

And then there are marketing campaigns that have influenced our lifestyle to the point they’ve shifted the entire culture. We don’t question them, and we’re likely unaware that we believe certain things because marketing agencies want us to. (Why do we propose with diamonds, after all?)

Here are six iconic things that started as marketing campaigns. 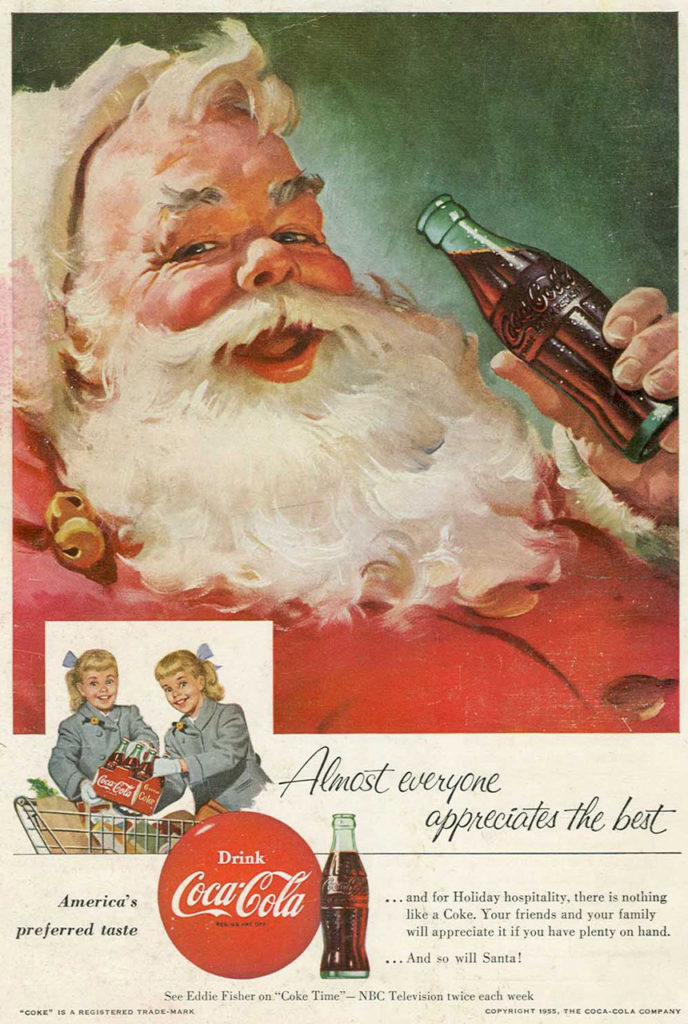 Prior to the 1930s, Santa Clause wasn’t depicted as a jolly man with a beard and a red suit. He was actually depicted as many things, including a creepy elf-like figure and, most commonly, a bishop… you know, Saint Nicholas.

In the early 193os, however, The Coca-Cola Company started taking out Christmas ads in magazines, and hired an artist to paint Santa more like the way we know him today. The artist based his depiction off of the famous poem ‘Twas the Night Before Christmas — although Santa was suspiciously dressed in Coke’s colors.*

The ads became iconic, as did their poster boy. So next time drunk Uncle Al shows up at your family Christmas get together wearing a big red suit and fake beard, thank Coca-Cola.

* Santa has been known to have been painted in red and white prior to these ads, but come on… Coke knows what it’s doing.

You may know that De Beers controls the supply of just about every diamond in the world. But did you know they also created the demand?

De Beers wanted to launch marketing campaigns in countries that could buy diamonds in mass (read: The US). The problem was, this was the late 1930s (read: slow economy), and most people thought diamonds were over-priced luxury items. (The audacity!)

So they hired the marketing company N.W. Ayer, who came up with the idea to link diamonds to marriage. According to New York Times, N.W. Ayer stated they wanted to “create a situation where almost every person pledging marriage feels compelled to acquire a diamond engagement ring.”

How’d they do it? Among other things… celebrities. And in the 1940s De Beers coined the phrase “A Diamond is Forever,” which they’ve been using ever since. 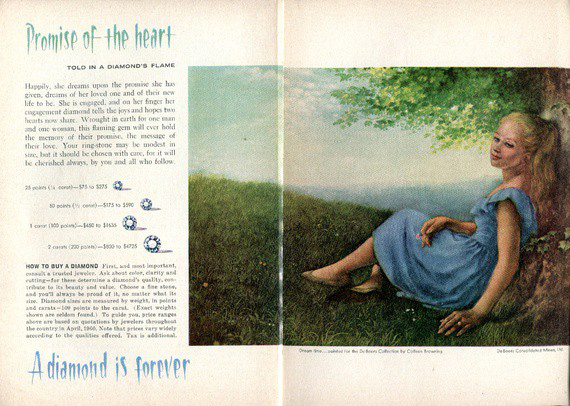 Then came the big campaign that infuriates, frustrates, and frazzles men to this day. Do you know how much you’re supposed to pay for an engagement ring? (Answer: two months salary). Do you know who came up with that? You guessed it. In the 1980s the agency introduced a series of ads: “Isn’t two months’ salary a small price to pay for something that lasts forever?”

The entire history of diamonds is pretty fascinating from a business perspective, but it should also make everyone feel like suckers. That’s why I bought my girl a nice big shiny morganite. 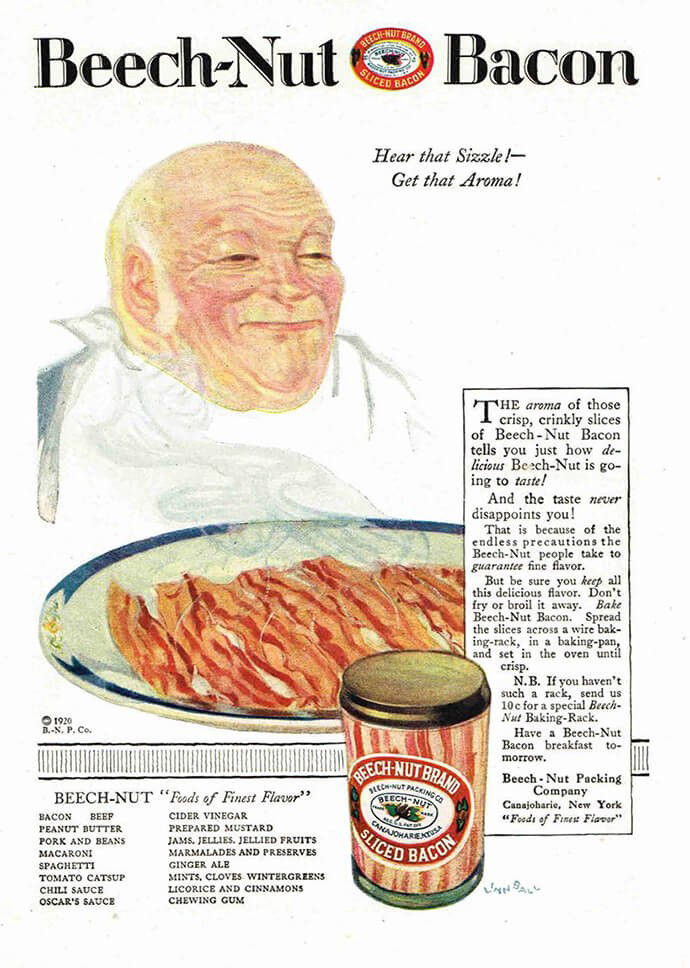 No, bacon itself didn’t start as a marketing campaign; however, the “All-American” bacon and eggs breakfast did.

I’m a vegetarian, so I don’t eat bacon for breakfast. In the early 1900s, neither did most other people. But the Beech-Nut Packing Company wanted people to eat more bacon, so they hired Edward Bernays (a.k.a. the guy who made smoking awesome).

Bernays surveyed 5,000 doctors and asked if a “hearty breakfast was better than a light breakfast to replace the energy lost by the body at night.” As expected, most doctors said a “hearty” breakfast was better. That’s it. That’s what Bernays used to start a national campaign touting a “scientific study” that made bacon a part of the hearty “All-American” breakfast.

Bernays was the king at utilizing psychoanalysis to sell America things. Makes sense. His uncle was Sigmund Freud.

The Hollywood sign is certainly an iconic landmark, representing an entire industry. But how often do you stop to think, “Wait, why the hell is it even there?”

Well, as it turns out, the sign is as authentic to film as the noses you see on screen. It was put up in the 1923 by Los Angeles Times publisher Harry Chandler as a billboard for his real estate development. That’s right, he was just advertising houses. In fact, the name of the development was “Hollywood-land,” which the sign originally said. It even had flashing lights. 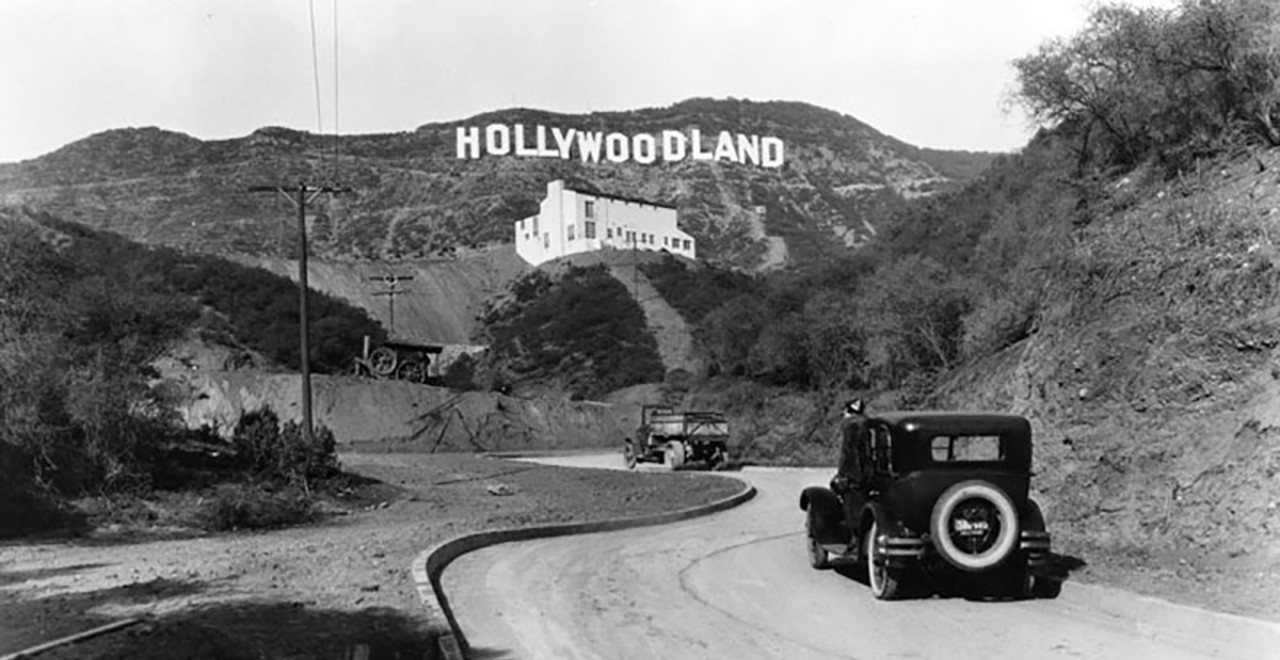 Then, as with diamonds, people found a way to link it to something emotional. Entertainment. Lights, glitz, and glam, and (also as with diamonds) celebrities! So they took away a syllable and the flashing lights, and it’s been there ever since.

Specifically, the use of deodorant and razors.

In the early 1900s, people just didn’t care that they sweat. Deodorant wasn’t a thing. Then a woman named Edna Murphey hired a marketing agency to help sell an antiperspirant doctors were using to keep their hands from sweating during surgery. The ads targeted women, and stated that sweating was an “embarrassing medical ailment in need of a remedy.”

The ads worked, but sales eventually stalled, so the company (called Odorono — get it?) launched another campaign that was more aggressive. They touted ladies underarms as super sexy, and effectively said, “if you want to keep a man, you’d better not smell.” 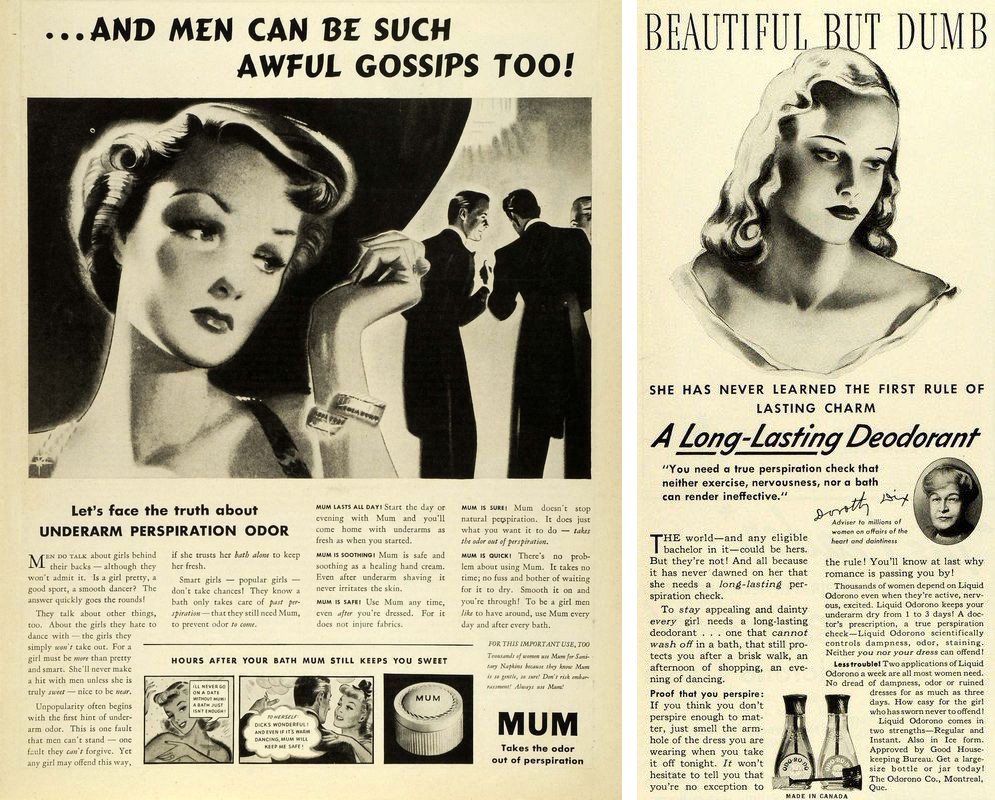 Seriously, how fucked up is the one on the right?! (Sarah Everts / Smithsonian)

Around the same time, Gillette decided to convince women that underarm hair was to blame for the smell. Fueled by the flapper movement and increasingly scantily-clad clothing, Gillette took it upon themselves to say that body hair on women anywhere was both unhygienic and unfashionable. Subsequently, they’ve sold a lot of razors. 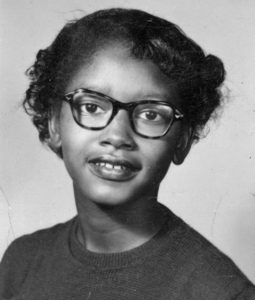 Let me say this (as I sense an involuntary reaction to “cancel” me happening in mass right now): I do not wish to take anything away from Rosa Parks or diminish her contribution to history or the civil rights movement. That said… have you ever heard of Claudette Colvin?

Claudette got arrested for not giving up her seat on a bus to a white man. According to Author Phil Hoose, she actually “challenged the law in court… [and] overturned bus segregation laws in Montgomery and Alabama.”

After her arrest, Claudette became pregnant. Civil rights leaders at the forefront of the movement didn’t think that was the “symbol” they wanted.

So why Rosa? According to Hoose’s book, Claudette Colvin: Twice Toward Justice, “Colvin says the NAACP and all the other black organizations felt Parks would be a good icon because ‘she was an adult. They didn’t think teenagers would be reliable.’ She also says Parks had the right hair and the right look. ‘Her skin texture was the kind that people associate with the middle class,’ says Colvin. ‘She fit that profile.‘”

Again, this takes nothing away from Rosa Parks. But if selecting her because she was an adult with the “right look” isn’t marketing, then what is?

It isn’t lost on me that all of these things (save the last one) took place around the time of the Roaring 20s and The Great Depression. Were Americans simply more gullible 100 years ago? I don’t think so. While economic circumstances and technology were (and still are) certainly factors, we’re just as susceptible to propaganda today. Only now, instead of taking ads out in The Saturday Evening Post, we’re talking about big data (read: Cambridge Analytica).

That is to say, marketing has changed dramatically. Humans have not.